Nauman was born in Fort Wayne, Indiana, but his father's work as an engineer for General Electric meant that the family moved often.[1] He studied mathematics and physics at the University of Wisconsin–Madison (1960–64), and art with William T. Wiley and Robert Arneson at the University of California, Davis (1965–6). In 1964 he gave up painting to dedicate himself to sculpture, performance and cinema collaborations with William Allan and Robert Nelson. He worked as an assistant to Wayne Thiebaud. Upon graduation (MFA, 1966), he taught at the San Francisco Art Institute from 1966 to 1968, and at the University of California at Irvine in 1970. In 1968 he met the singer and performance artist Meredith Monk and signed with the dealer Leo Castelli. Nauman moved from Northern California to Pasadena in 1969. In 1979, Nauman further moved to Pecos, New Mexico. In 1989, he established a home and studio in Galisteo, New Mexico, where he continued to work and live with his second wife, the painter Susan Rothenberg until her death in 2020. Nauman has two children, Erik and Zoë, with his first wife, Judy Govan, and he also has two grandchildren.[2]

Confronted with "What to do?" in his studio soon after graduating, Nauman had the simple but profound realization that “If I was an artist and I was in the studio, then whatever I was doing in the studio must be art. At this point art became more of an activity and less of a product.”[3] Nauman set up a studio in a former grocery shop in the Mission district of San Francisco and then in a sublet from his university tutor in Mill Valley. These two locations provided the setting for a series of performed actions which he captured in real time, on a fixed camera, over the 10-minute duration of a 16mm film reel.[4] Between 1966 and 1970 he made several videos, in which he used his body to explore the potentials of art and the role of the artist, and to investigate psychological states and behavioural codes.

Much of his work is characterized by an interest in language, often manifesting itself as visual puns. He has an interest in setting the metaphoric and descriptive functions of language against each other. For example, the neon Run From Fear – Fun From Rear, or the photograph Bound To Fail, which literalizes the title phrase and shows the artist's arms tied behind his back. He seems to be fascinated by the nature of communication and language's inherent problems, as well as the role of the artist as supposed communicator and manipulator of visual symbols.

In the 1960s, Nauman began to exhibit his work at Nicholas Wilder's gallery in Los Angeles and in New York at Leo Castelli in 1968 along with early solo shows at the Los Angeles County Museum of Art and the Whitney Museum in 1972. 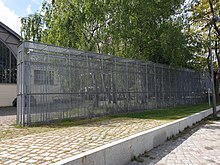 His Self Portrait as a Fountain (1966) shows the artist spouting a stream of water from his mouth. At the end of the 1960s, Nauman began constructing claustrophobic and enclosed corridors and rooms that could be entered by visitors and which evoked the experience of being locked in and of being abandoned. A series of works inspired by one of the artist's dreams was brought together under the title of Dream Passage and created in 1983, 1984, and 1988.[6] In his installation Changing Light Corridor with Rooms (1971), a long corridor is shrouded in darkness, whilst two rooms on either side are illuminated by bulbs that are timed to flash at different rates.[7]

Since the mid-1980s, primarily working with sculpture and video, Nauman developed disturbing psychological and physical themes incorporating images of animal and human body parts, depicting sadistic allusions to games and torture together with themes of surveillance. In 1988, after a hiatus of nearly two decades focused on time-based media, he resumed his work with cast objects.[8]

Some of Nauman's best-known works include:

In 1990, the Greater Des Moines Public Art Foundation commissioned a cast bronze version of Nauman's Animal Pyramid (1989), a stack of seventeen taxidermy molds rising to twelve feet. It is installed in the grounds of the Des Moines Art Center, Iowa.[8]

Bruce Nauman holds honorary Doctor of Fine Arts degrees from the San Francisco Art Institute and the California Institute of the Arts. His awards include:

Time named Nauman one of their 100 most influential people in 2004. In 2006, Artfacts.net ranked Nauman as number one among living artists, followed by Gerhard Richter and Robert Rauschenberg.[67] In 2013, Complex ranked Wall-Floor Positions the 19th best work of performance art in history.[68]

Nauman has cited as major influences the following writers, philosophers, and artists:

Nauman was a part of the Process Art Movement.

Nauman's earliest supporters, in the 1970s, were mainly European patrons and institutions, such as the Kunstmuseum Basel. Chicago-based collector Gerald Elliott was the first American to amass a sizable number of Naumans, including the 1966 plaster sculpture Mold for a Modernized Slant Step, all of which went to the Museum of Contemporary Art, Chicago, when he died in 1994. Emerging later as a prominent buyer was Friedrich Christian Flick, who collected more than 40 pieces from throughout Nauman's career.

Two of Nauman's early auction records were for monumental neons, both walls of blinking punning phrases: Sotheby's New York hammered down One Hundred Live and Die (1984) to the Benesse Art Site, in Naoshima, Japan, for $1.9 million in 1992,[69] and five years later sold Good Boy/Bad Boy (1986–87) to the Daros Collection in Zürich for $2.2 million. Nauman's neon work Violins Violence Silence (1981/82) realized $4 million at Sotheby's New York in 2009.[70]

By 2001, the sculpture Henry Moore Bound to Fail (1967), a wax and plaster cast of Nauman's own arms tied behind his back, had set a new auction record for postwar art when Christie's sold it for $9.9 million to Francois Pinault. In 2002, Sperone Westwater Gallery sold Mapping the Studio (Fat Chance John Cage) (2001), four videos showing Nauman's cat chasing mice during the night, for $1.2 million apiece to such museums as Tate Modern, London; Dia Art Foundation, New York; Kunstmuseum Basel; and Centre Pompidou, Paris.