Japanese photographer and artist
This article is about the photographer. For other uses, see Araki (surname).

Nobuyoshi Araki (荒木 経惟, Araki Nobuyoshi, May 25, 1940) is a Japanese photographer and contemporary artist professionally known by the mononym Arākī (アラーキー). Known primarily for photography that blends eroticism and bondage in a fine art context, he has published over 500 books.[n 1][1][2][3]

The Icelandic musician Björk is an admirer of Araki's work, and served as one of his models.[2][12] At her request, he photographed the cover and inner sleeve pages of her 1997 remix albumTelegram. More recently, he has photographed pop singer Lady Gaga.[12]

In 2005, an American director, Travis Klose, recorded a documentary about Araki called Arakimentari, which discusses the artist's lifestyle and work.

Araki was diagnosed with prostate cancer in 2008; he underwent successful surgery to remove the tumor.[13]

In October 2013, Araki lost vision in his right eye due to a retinal artery obstruction. The 74-year-old artist used the experience as an inspiration to exhibit Love on the left eye, held on 21 June 2014 at Taka Ishii Gallery, Tokyo.[15]

Araki is known for his intimate access to models. When asked about this in 2011, he bragged that he gained access through sex.[17]

In April 2018, Kaori, a model who posed for Araki from 2001 to 2016, wrote a blog post about her relationship with Araki[18] in which she accused him of financial and artistic exploitation.[19] Kaori stated that "she worked without a contract, was forced to take part in explicit shoots in front of strangers, was not regularly paid and that her nude images were often used without her consent."[19] In 2017, when she requested that he stop republishing or exhibiting some photographs of her, Araki wrote to Kaori, warning that she had no rights.[18] She states that the experience led to psychological trauma and ill health.[19] Kaori stated that the Me Too movement had encouraged her to speak out.[18] The accusations have raised questions about the power dynamics between a photographer and his subject.[18] In order to raise awareness of Kaori's claims, the activist group Angry Asian Girls Association protested the opening of an exhibition of photographs by Araki at C/O Berlin December 2018.[20]

Films based on Araki's life 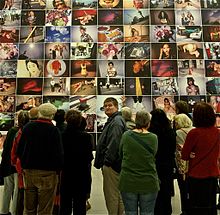 Some of Araki's works at Museum für Moderne Kunst, Frankfurt

Araki's work is held in the following permanent public collections: