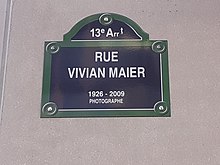 Vivian Dorothy Maier (February 1, 1926 – April 21, 2009) was an American street photographer whose work was discovered and recognized after her death. She worked for about 40 years as a nanny, mostly in Chicago's North Shore, while pursuing photography. She took more than 150,000 photographs during her lifetime, primarily of the people and architecture of Chicago, New York City, and Los Angeles, although she also traveled and photographed worldwide.[1]

Her life and work have been the subject of books and documentary films, including the film Finding Vivian Maier (2013), which premiered at the Toronto International Film Festival,[7] and was nominated for the Academy Award for Best Documentary Feature at the 87th Academy Awards.[8]

Many details of Maier's life remain unknown. She was born in New York City in 1926, the daughter of a French mother, Maria Jaussaud Justin, and an Austrian father, Charles Maier (also known as Wilhelm).[9] Several times during her childhood she moved between the U.S. and France, living with her mother in the alpine village of Saint-Bonnet-en-Champsaur near her mother's relatives. Her father seems to have left the family temporarily for unknown reasons by 1930. In the 1930 Census, the head of the household was listed as Jeanne Bertrand, a successful photographer who knew Gertrude Vanderbilt Whitney, founder of the Whitney Museum of American Art.[10][11] When Maier was 4, she and her mother moved to the Bronx with Bertrand.

In 1935, Vivian and her mother were living in Saint-Julien-en-Champsaur; three years later, they returned to New York. In the 1940 Census, Charles, Maria, Vivian and Charles Jr were listed as living in New York, where the father worked as a steam engineer.[12]

In 1951, aged 25, Maier moved from France to New York, where she worked in a sweatshop. She moved to the Chicago's North Shore area in 1956, where she worked primarily as a nanny and carer for the next 40 years. In her first 17 years in Chicago, Maier worked as a nanny for two families: the Gensburgs from 1956 to 1972, and the Raymonds from 1967 to 1973. Lane Gensburg later said of Maier, "She was like a real, live Mary Poppins," and said she never talked down to kids and was determined to show them the world outside their affluent suburb.[13] The families who employed her described her as very private and reported that she spent her days off walking the streets of Chicago and taking photographs, usually with a Rolleiflex camera.[14]

John Maloof, curator of some of Maier's photographs, summarized the way the children she nannied would later describe her:

She was a Socialist, a Feminist, a movie critic, and a tell-it-like-it-is type of person. She learned English by going to theaters, which she loved ... She was constantly taking pictures, which she didn't show anyone.[15]

In 1959 and 1960, Maier embarked on a solo trip around the world, taking pictures in Los Angeles, Manila, Bangkok, Shanghai, Beijing, India, Syria, Egypt, and Italy.[16] The trip was probably financed by the sale of a family farm in Saint-Julien-en-Champsaur. For a brief period in the 1970s, Maier worked as a housekeeper for talk-show host Phil Donahue.[17] She kept her belongings at her employers'; at one residence, she had 200 boxes of materials. Most contained photographs or negatives, but Maier also collected newspapers;[10] in at least one instance, it involved "shoulder-high piles."[18] She also recorded audiotapes of conversations she had with people she photographed.[14][19] In the documentary films Finding Vivian Maier (2013) and Vivian Maier: Who Took Nanny's Pictures / The Vivian Maier Mystery (2013), interviews with Maier's employers and their children suggest that Maier presented herself to others in multiple ways, with various accents, names, life details, and that with some children, she had been inspiring and positive, while with others she could be frightening and abusive.[17]

The Gensburg brothers, whom Maier had looked after as children, tried to help her as she became destitute in old age. When she was about to be evicted from a downmarket apartment in the suburb of Cicero, the Gensburg brothers arranged for her to live in a better apartment on Sheridan Road in the Rogers Park area of Chicago. In November 2008, Maier fell on the ice and hit her head. She was taken to a hospital but failed to recover. In January 2009, she was transported to a nursing home in the Chicago suburbs, where she died on April 21.[20]

In 2007, two years before she died, Maier failed to keep up payments on storage space she had rented on Chicago's North Side. As a result, her negatives, prints, audio recordings, and 8 mm film were auctioned. Three photo collectors bought parts of her work: John Maloof, Ron Slattery and Randy Prow.[21] Maier's photographs were first published on the internet in July 2008 by Slattery, but the work received little response.[2]

Maloof had bought the largest part of Maier's work, about 30,000 negatives, because he was working on a book about the history of the Chicago neighborhood of Portage Park.[22] Maloof later bought more of Maier's photographs from another buyer at the same auction.[10] Maloof discovered Maier's name in his boxes but was unable to discover anything about her until a Google search led him to Maier's death notice in the Chicago Tribune in April 2009.[23] In October 2009, Maloof linked his blog to a selection of Maier's photographs on Flickr; they became a viral phenomenon, with thousands of people expressing interest.[10]

In early 2010, Chicago art collector Jeffrey Goldstein acquired a portion of the Maier collection from Prow, one of the original buyers.[21] Since Goldstein's original purchase, his collection has grown to include 17,500 negatives, 2,000 prints, 30 home movies, and numerous slides. In December 2014, Goldstein sold his collection of B&W negatives to Stephen Bulger Gallery, Toronto. Maloof, who runs the Maloof Collection, now owns around 90% of Maier's total output, including 100,000 to 150,000 negatives, more than 3,000 vintage prints, hundreds of rolls of film, home movies, audio tape interviews, and ephemera including cameras and paperwork, which he claims represents roughly 90 percent of her known work.[24]

Since her posthumous discovery, Maier's photographs, and their discovery, have received international attention in mainstream media,[3][4][25][26] and her work has appeared in gallery exhibitions, several books, and documentary films.

In June 2014, lawyer and former photographer David C. Deal filed a legal case challenging the rights of current owners of Maier's negatives to commercialize them.[27] The case sought to establish whether there is a legal heir to Maier's estate — a cousin in France — who should be recognized under American law. Under copyright law in the US, owning a photograph is distinct from owning copyright and the case may take several years to resolve, particularly since the potential heirs to the estate live outside the US.[27] Maloof, who owns the majority of Maier's known photographs, had previously tracked down a first cousin once removed in France and paid him for the rights; however, Deal believes he has found a closer relative in France who may be the estate's beneficiary.[28][29]

Because of the dispute, Cook County, Illinois created an estate for Maier. In 2016, the county-administered estate reached a settlement which allowed Maloof to continue promoting Maier's work and keep an undisclosed amount of the proceedings. Goldstein refused to settle with the estate and was sued by the county for copyright infringement in 2017. As of 2018, the estate had not yet determined Maier's rightful heirs.[30]

Artist and photography critic Allan Sekula has suggested that the fact that Maier spent much of her early life in France sharpened her visual appreciation of American cities and society. Sekula compared her work with the photography of Swiss-born Robert Frank: "I find myself imagining her as a female Robert Frank, without a Guggenheim grant, unknown and working as a nanny to get by. I also think she showed the world of women and children in a way that is pretty much unprecedented."[16]

Maloof has said of her work: "Elderly folk congregating in Chicago's Old Polish Downtown, garishly dressed dowagers, and the urban African-American experience were all fair game for Maier's lens."[31] Photographer Mary Ellen Mark has compared her work to that of Helen Levitt, Robert Frank, Lisette Model, and Diane Arbus. Joel Meyerowitz, also a street photographer, has said that Maier's work was "suffused with the kind of human understanding, warmth and playfulness that proves she was 'a real shooter'."[32]

Maier's best-known photographs depict street scenes in Chicago and New York during the 1950s and 1960s.[33] A critic in The Independent wrote that "the well-to-do shoppers of Chicago stroll and gossip in all their department-store finery before Maier, but the most arresting subjects are those people on the margins of successful, rich America in the 1950s and 1960s: the kids, the black maids, the bums flaked out on shop stoops."[25] Most of Maier's photographs are black and white, and many are casual shots of passers-by caught in transient moments "that nonetheless possess an underlying gravity and emotion".[10]

In 1952 she purchased her first Rolleiflex camera. Over the course of her career she used Rolleiflex 3.5T, Rolleiflex 3.5F, Rolleiflex 2.8C, Rolleiflex Automat and others. She later also used a Leica IIIc rangefinder camera, an Ihagee Exakta, a Zeiss Contarex and other SLR cameras.

Writing in The Wall Street Journal, William Meyers notes that because Maier used a medium-format Rolleiflex, rather than a 35mm camera, her pictures have more detail than those of most street photographers. He writes that her work brings to mind the photographs of Harry Callahan, Garry Winogrand, and Weegee, as well as Robert Frank. He also notes that there are a high number of self-portraits in her work, "in many ingenious permutations, as if she were checking on her own identity or interpolating herself into the environment. A shadowy character, she often photographed her own shadow, possibly as a way of being there and simultaneously not quite there."[34]

Roberta Smith, writing in The New York Times, has drawn attention to how Maier's photographs are reminiscent of many famous 20th-century photographers, and yet have an aesthetic of their own. She writes that Maier's work "may add to the history of 20th-century street photography by summing it up with an almost encyclopedic thoroughness, veering close to just about every well-known photographer you can think of, including Weegee, Robert Frank and Richard Avedon, and then sliding off in another direction. Yet they maintain a distinctive element of calm, a clarity of composition and a gentleness characterized by a lack of sudden movement or extreme emotion."[35]

In the documentary film Finding Vivian Maier (2013), the grown-up children whom Maier had cared for in the 1950s, '60s, and '70s recall how she combined her work as a photographer with her day job as a nanny. She would frequently take the young children in her care with her into the center of Chicago when she took her photographs. Occasionally they accompanied her to the rougher, run-down areas of Chicago, and, on one occasion, the stock yards, where there were bodies of dead sheep.[17]

In the late 1970s, Maier stopped using her Rolleiflex. Most of her photographs taken in the 1980s and 1990s were color transparencies, taken on Ektachrome film.[36]

In the 2014 to 2015 school year at the School of the Art Institute of Chicago, the Vivian Maier Scholarship Fund was established to provide opportunity to female students with need for additional financial resources.[37] The scholarship was endowed through donations by Maloof, Siskel and Howard Greenberg,[37] the owner of Howard Greenberg Gallery which exhibits and deals her work.[38] Maloof used the funds received from print sales and his film Finding Vivian Maier to help create the scholarship with the intention for it to be permanent and offered on a yearly basis.[39] With no application process, the money will be awarded to students not based on degree, enrollment year, or medium they are working within, allowing artistic freedom to the recipients.[37] The names of recipients have not been publicly released.

In 2017, the University of Chicago Library announced that a research collection of Maier images was donated by Maloof.[40]