“In her self-portrait Venus Baartman 2001, Tracey Rose poses as Sarah Baartman, a Khoi-San woman from Capetown, South Africa. Baartman became known by the racist name the ‘Hottentot Venus’ after she was brought to Europe in 1810 and displayed as a side-show attraction. Rose’s work pays tribute to Baartman whom she transforms into a symbol of black female struggle.” (source: http://www.tate.org.uk/whats-on/tate-liverpool/exhibition/afro-modern-journeys-through-black-atlantic/afro-modern-room-6)

Tracey Rose is a South African artist who lives and works in Johannesburg. Rose is best known for her performances, video installations, and photographs.

Rose was born in 1974 in Durban, South Africa. She attended the University of the Witwatersrand in Johannesburg in Fine Arts where she obtained her B.A. in 1996. She taught at Vaal Triangle Technikon, Vanderbijl Park, South Africa and at the University of the Witwatersrand. In February and March 2001 she was artist-in-residence in Cape Town at the South African National Gallery where she developed her work for the Venice Biennale 2001 curated by Harald Szeemann. Tracey Rose is represented in the US by Christian Haye of The Project.[1] 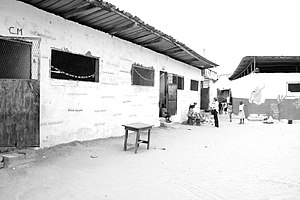 Rose's work responds to the limitations of dogma and the flaws in institutionalised cultural discourse. Her practice, which is known for centering on performance, also includes photography, video, and installation. Always evident in her work is the artist's insistence in confronting the politics of identity, including sexual, racial, and gender-based themes.[2] According to Jan Avgikos, "part of Rose's appeal is her fluid referencing of '60s and '70s performance art".

According to Sue Williamson,[3] "Tracey Rose is not a practitioner who jumps at every curatorial opportunity offered her, and has been known to withdraw from more than one exhibition if the circumstances have not seemed right." Rose's work has been widely exhibited in Africa, Europe and the United States. Recent solo exhibitions include "The Cockpit" at MC, Los Angeles, CA, "Plantation Lullabies" at Goodman Gallery, Johannesburg, South Africa, both in 2008.

Recent group exhibitions include "El mirall sud-africà" at the Centre De Cultura Contemporània De Barcelona, Spain, "Mouth Open, Teeth Showing: Major Works from the True Collection" at the Henry Art Gallery in Seattle, "Memories of Modernity" in Malmo, Sweden, "Check List: Luanda Pop" at the African Pavilion in the 52nd Venice Biennale, Italy, "Heterotopias" at the Thessaloniki Biennale in Greece, and "Global Feminisms" at The Elizabeth A. Sackler Center for Feminist Art in Brooklyn, New York (all 2007), and the 11th Lyon Biennale "A terrible beauty is born" in 2011.

Caryatid & BinneKant Die Wit Does and Imperfect Performance: A tale in Two States are among her most recent live performances, seen at the Düsseldorf Art Fair in Germany, and the Moderna Museet in Stockholm, Sweden, respectively. In 2001 Rose was also included in "Plateau de l'humanite" in the 49th Venice Biennale curated by Harald Szeemann.