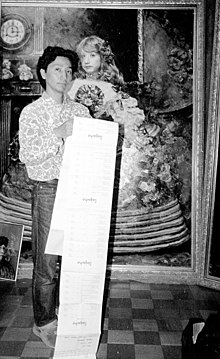 Yasumasa Morimura in his Osaka studio 1990; photograph by Sally Larsen. 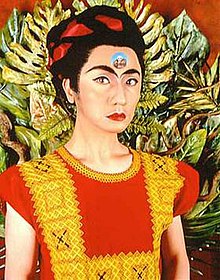 Yasumasa Morimura (森村 泰昌, Morimura Yasumasa, born June 11, 1951) is a Japanese appropriation artist. He was born in Osaka and graduated from Kyoto City University of Arts in 1978. Since 1985, Morimura has primarily shown his work in international solo exhibitions, although he has been involved in various group exhibitions.[1]

Yasumasa Marimura graduated from Kyōto City University of Arts in 1978, Philadelphia College of Art in 1982, and Columbia University in 1985. Then he served as an assistant at the university and devoted himself to painting, drawing, photography, and wood-block art. Morimura first attracted attention in 1988, when a number of his self-portraits were included in the Venice Bienalle's Aperto exhibition for young artists.[2] Morimura's first published artword was a recreation titled Portrait (Van Gogh) in 1985 where he recreated Vincent van Gogh's famous portrait after he had cut off his ear. Next was his redoings of well-known pieces like (Mona Lisa in its Origin [1998]), (An Inner Dialogue with Frida Kahlo [Collar of Thorns] [2001]), (In Praise of Velázquez: distinguished ones in confinement [2013]) and (A Requiem: Theatre of Creativity/Self-portrait as Pablo Picasso [2010]), world figures like Ché Guevara, Adolf Hitler, and Chairman Mao.[3] Morimura's self-portraits were of Audrey Hepburn, Marilyn Monroe, Greta Garbo, and Liza Minnelli. Other earlier works include Little Sister (+ Elder Sister; 2 works), Angels Descending a Staircase, and Six Brides Six Brides all from 1991.[4]

Morimura borrows images of figures from history and art history (including: Douglas MacArthur, Emperor Hirohito, Audrey Hepburn, Édouard Manet, Rembrandt, Cindy Sherman), and inserts his own face and body into them.[5][6] He also disguises himself as the principal subjects that appear in the artworks he is inspired by. Many of the works he puts himself in pushes cultural, racial, ethnic, and gender boundaries as an Asian male because most of the artworks he appropriates have Western subjects, particularly female subjects.[7] These include Mona Lisa, Frida Kahlo's self-portraits, and the characters in Velázquez's Las Meninas (1956).[citation needed] He also inserted himself into some of the Western male subjects, and the majority of those works mostly deal with race and ethnicity. Through the use of disguises, he overturns the effects of the male gaze, gender, race, ethnicity, and cultural standards, challenging the traditional methods of portraiture that he alters the original Western artworks by incorporating details related to Japanese culture.[8] In one of his works, Portrait (Futago), Morimura changes the floral shawl from the original artwork, Olympia by Manet, with a kimono decorated with cranes.[8] Because traditional portraits were mostly Western dominated, Morimura's combination of crossing multiple boundaries at a marginalized position became a major focus through his photographic works.[9] He has also created a series of hybrid self-portraits modeled after the art of Frida Kahlo.

Parody is discussed as the postmodern strategy. It is theorized with regard to concepts of gender and sexual identities as performative acts, as much as to aesthetic practices. Using photography and his own body, Morimura re-images some of art history's masterpieces. As well as, images drawn from popular culture such as stills of female movie stars like Marilyn Monroe, Jodie Foster, Vivien Leigh, and Marlene Dietrich.[9] Through his masterworks, Morimura transgresses his cultural and gender territories; from East to West and from male to female. His photographs also reveal that photography deconstructs the self-portrait, and that the photographic self-portrait is a new way of constituting and realizing the self, and of our contemporary way of seeing our own absence.[7]

In 1988, Yasumasa Morimura came out with a color photograph in which he inserted himself and re-enacted a famous print in history. In his signature photograph, Doublonnage (Marcel), Morimura appeared as Marcel Duchamp’s alter ego Rrose Sélavy.[10] In the photograph, Morimura is dressed as an elegant woman and he is also mimicking the pose that Duchamp does. Morimura displays a second pair of hands in his photograph and is also wearing a hat similar to Duchamp’s, while having a second hat on top.[11] As Francine Koslow Miller, stated in Artforum International, Morimura replaces Duchamp’s European features with his own Japanese features. [12] This particular work of art is significant and special because Morimura embeds himself in a piece of work that is already purposefully frolicking with cultural imagery. Morimura was able to change the meaning of this photograph because he changed the image by playing with dual imagery and ethnicity.[9] According to Cave Art, Morimura expresses that identity is changing constantly and has many applications or interpretations. Through his art, Morimura also argues that identity is made up of many aspects: political, cultural and personal.[13]