Slater Bradley is an American artist who works in the mediums of photography, drawing, painting, film and video. Dubbed the "unintended king of serendipity" by Heidi Zuckerman Jacobson,[1] he has exhibited collaborative work with Ed Lachman at the Aspen Art Museum and the Whitney Museum of American Art. In 2005, at the age of 30, Bradley became the youngest male artist to have a solo show at The Solomon R. Guggenheim Museum in New York.[citation needed] He is represented by Galeria Filomena Soares in Lisbon, Portugal;[citation needed] Galería Pelaires in Mallorca, Spain;[citation needed] Galleria Poggiali in Florence / Milan / Pietrasanta, Italy;[citation needed] Martin Asbaek Gallery in Copenhagen, Denmark; and Melissa Morgan Fine Art in Palm Desert, California. He currently lives and works in Berlin, Germany.[citation needed]

Bradley launched his career with his first solo show titled The Fried Liver Attack, named after the chess gambit which sacrifices the knight, at Team Gallery in 1999.[citation needed]

He gained notoriety at 25, with his second solo show, Charlatan, also at Team Gallery, which displayed his "real flair for capturing emotional moments".[2] The show featured a video work with actress Chloë Sevigny standing on a cloudy beach reciting Thomas Mann's Tonio Kröger as well as the videos JFK Jr. and Female Gargoyle. In a review of Charlatan, critic Roberta Smith offers the statement "It is a declaration of artistic intent that makes one eager to see what Mr. Bradley will do next."[3] Next, Bradley introduced the concept of "The Doppelganger" as a central theme of his work, in 2001 during a show titled Trompe le Monde at Galerie Yvon Lambert in Paris. The video for Trompe le Monde marks the first appearance of The Doppelganger, portrayed by model Ben Brock, a concept which continues to be woven into Bradley's work at present.

In 2002 during the show Here are the Young Men at Team Gallery, Bradley included the video Factory Archives, 2001-2002, which would later become the first of three videos in the acclaimed Doppelganger Trilogy. This series involved the subject of "recycled illusions that are the reality of pop culture"[4] which was continually referenced throughout Bradley's work until The Doppelganger's symbolic death in the 3-channel video installation Dead Ringer from 2011.

By 2004, Slater Bradley was considered a "rising younger artist",[5] having held a solo exhibition in 2003 at the Center for Curatorial Studies Museum at Bard College and being included in the 2004 Whitney Biennial with the video Theory and Observation which critic Jerry Saltz described as one of "the most ravishing works in the show".[6] Also in 2004, Bradley showed at the Museum of Modern Art's Premieres and exhibited the Doppelganger Trilogy at the Los Angeles gallery, Blum & Poe, which was later shown by The Guggenheim in 2005, under the title Recent Acquisitions: Slater Bradley's Doppelganger Trilogy.[7]

In 2010, Bradley held an exhibition at the Whitney Museum in collaboration with Academy Award nominated Cinematographer Edward Lachman, titled Shadow featuring the Doppelganger as River Phoenix.[citation needed] Shadow served as a prologue to the unfinished Hollywood film Dark Blood.[citation needed]

A theme of the "lost woman," an idea sourced chiefly from Chris Marker's film La Jetée, became central to Bradley’s work after the completion of Shadow. Following Marker's death on July 29, 2012, Bradley began work on what would become his homage to the 1962 sci-fi masterpiece. His video, entitled she was my la jetée premiered on Nowness.com on April 5, 2013 and was shown soon after in an eponymous exhibition at Galería Helga de Alvear in Madrid, Spain as well as part of Sequoia: Recent Work by Slater Bradley at Cornell University's Johnson Museum of Art.

The elusive female subject continued to haunt Bradley over the course of a solo show with Sean Kelly gallery during which the artist completed his work in a small bunker of the gallery’s basement. The exhibition A Point Beyond the Tree whose title was taken from a line in Marker’s film, opened on December 14, 2013 alongside Saints and Sinners, a selection of Robert Mapplethorpe’s portraits celebrating the 25th anniversary of his counterculturally groundbreaking exhibition Robert Mapplethorpe: The Perfect Moment.

In a parallel investigation, Bradley was at work on a lifelike copper casting of his high school baseball glove, revisiting the Salingerian themes found in his 2009–2011 video, don't let me disappear. Surprisingly, the copper sculpture, Cancer Rising, was completed just as Shane Salerno's documentary Salinger was released in the U.S., and just prior to the peculiar leak of three unpublished Salinger stories. The first of these, "The Ocean Full of Bowling Balls" brings to life a familiar character from Catcher in the Rye, a boy in the habit of inscribing verses of poetry, selections from William Blake, John Keats and Robert Browning, across his firstbaseman's glove.

In the ultimate disappearing act, Bradley departed New York for Berlin in 2013. Once there, he began to re-invent himself through rigorous spiritual introspection. To share the learnings from his encounters with transcendence, Bradley co-founded a project space with Johannes Fricke Waldhausen in Munich called Goodroom where he exhibited and offered natal chart readings in December 2015. His work was curated into the group exhibition Dreaming Mirrors Dreaming Screens at Sprüth Magers gallery in 2016 with thirteen other artists including Jon Rafman, Andy Hope 1930 and Lizzie Fitch/Ryan Trecartin. The show considered the increasingly complex human relationship with screens, objects that have evolved to function as dual representations of both “the rational and the dreamlike.” 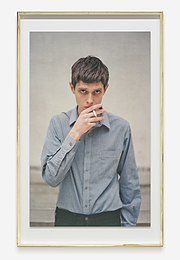 True Faith, an exhibition curated by Matthew Higgs and Jon Savage with the collaboration of archivist Johan Kugelberg in Manchester, England, was part of a 2017 city-wide arts festival commissioned to celebrate the music of Joy Division and explore their continuing cultural impact as a powerful inspiration to visual artists. Bradley’s photograph Factory Icon from 2000, portraying the artist’s doppelganger as Ian Curtis, was re-worked in the proportions of the golden rectangle and featured on the cover of the exhibition catalogue as well as displayed on banners hung throughout the city. Also on view was a video from Bradley's Doppelganger Trilogy from 2001–2004. As noted by Adrian Seattle writing for The Guardian, "in this work, it is not Ian Curtis on stage at all, but a double (Bradley’s other Doppelganger video portraits portray Kurt Cobain and Michael Jackson). The harder you look, the more difficult it is to grasp the image. The singer is only a trace: pinwheeling arms, a jerky back-and-forth shuffle, a looming face that comes and goes, that sonorous baritone voice, a thing more solid and permanent than this fleeting figure."[8]

Zuecca Projects presented Sundoor at World’s End, featuring Bradley’s sculpture Crystal Labyrinth (La Maddalena) in Venice, Italy in 2017, concurrent with the 57th Biennale. The installation, consisting of 888 rose quartz crystals forming a 7-meter diameter labyrinth and surrounded by solar shields, was installed from May through November at it:Chiesa della Maddalena (Venezia) (Church of Mary Magdalene) and was accompanied by a soundtrack by composer Dustin O’Halloran. It is a mystical work about spiritual ascension, and in the words of John Major Jenkins, the "journey up through the planetary spheres of the ecliptic to the door of the Most High, the Sol Invictus, the Eighth Gate, the realm of the Hypercosmic Sun." Sundoor at World’s Endwas nominated for a Global Fine Art Award for Best Public Exhibition.

Slater Bradley: Sundoor a monograph featuring texts by both John Major Jenkins and Rachel Baum was released in December 2018 by Kerber Verlag. The publication considers his international installation work dealing with collective spiritual experience, sacred sites, and personal histories. Bradley describes in an interview with Artsy how he thinks “there’s a neo-spiritual art movement happening.” He says: “At a certain point the truth is a bigger subject than pop culture. With meditation you find your inner peace, your inner truth, your centered truth, and then you find the world, and the world finds its center. That’s a noble pursuit for art these days.”[9] The book launched as part of the exhibition Under the Sunbeams opening at therethere gallery in Los Angeles in February 2019. Bradley exhibited his series of D8S paintings which play off the geometrics of astrological charts from chosen moments in time inspired by birthdates, founding fathers, origin stories pulled from the past and future.