Emil Otto Hoppé (14 April 1878 – 9 December 1972) was a German-born British portrait, travel, and topographic photographer active between 1907 and 1945. Born to a wealthy family in Munich, he moved to London in 1900 to train as a financier, but took up photography and rapidly achieved great success.

He was the only son of a prominent banker, and was educated in the finest schools of Munich, Paris and Vienna. Upon leaving school he served apprenticeships in German banks for ten years, before accepting a position with the Shanghai Banking Corporation. He never arrived in China. The first leg of his journey took him to England where he met an old school friend. Hoppé married his old school friend's sister, Marion Bliersbach, and stayed in London. While working for the Deutsche Bank, he became increasingly enamored with photography, and, in 1907, jettisoned his commercial career and opened a portrait studio. According to Bill Jay,

"Within a few years, E.O. Hoppé was the undisputed leader of pictorial portraiture in Europe. To say that someone has a "household name" has become a cliché, yet in Hoppé's case the phrase is apt. Rarely in the history of the medium has a photographer been so famous in his own lifetime among the general public. He was as famous as his sitters. It is difficult to think of a prominent name in the fields of politics, art, literature, and the theatre who did not pose for his camera."[1]

Although Hoppé was one of the most important photographic artists of his era and highly celebrated in his time, in 1954, at the age of 76, he sold his body of photographic work to a commercial London picture archive, the Mansell Collection. In the collection, the work was filed by subject in with millions of other stock pictures and no longer accessible by author. Almost all of Hoppé's photographic work—that which gained him the reputation as Britain's most influential international photographer between 1907 and 1939—was accidentally obscured from photo-historians and from photo-history itself. It remained in the collection for over thirty years after Hoppé's death, and was not fully accessible to the public until the collection closed down and was acquired by new owners in the United States.

In 1994 photographic art curator Graham Howe retrieved Hoppé's photographic work from the picture library and rejoined it with the Hoppé family archive of photographs and biographical documents. This was the first time since 1954 that the complete E.O. Hoppé Collection was gathered together. Many years were spent in cataloguing, conservation, and research of the recovered work. 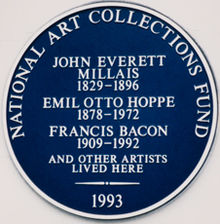 Blue plaque outside the house at 7 Cromwell Place, Kensington, London where Hoppe once lived from 1913

In his life, Hoppé's reputation attracted many important British and North American figures in politics, literature, and the arts. In the era before the first World War, Hoppé photographed many leading literary subjects and figures from the art world, such as Henry James, Rudyard Kipling, John Masefield, Léon Bakst, Anna Pavlova, Tamara Karsavina and other dancers of the Ballets Russes, Violet Hunt, Richard Strauss, Jacob Epstein and William Nicholson, some of whom were included in his 1913 exhibition. In the early 1920s he was invited to photograph Queen Mary, King George, and members of the royal family. Other subjects of the 1920s included Albert Einstein, Benito Mussolini, Robert Frost, Aldous Huxley, George Bernard Shaw and A.A. Milne. In the 1930s Hoppé photographed a number of dancers at the Vic-Wells company including Margot Fonteyn, Ninette de Valois, Hermione Darnborough and Beatrice Appleyard.

Working from a studio first in London's Baron's Court at 10 Margravine Gardens (1907–10), he later moved in 1911 to a Baker Street studio. In 1913 he took on a lease of 7 Cromwell Place, occupying all thirty-three rooms of the previous home of Sir John Everett Millais, which later (from 1937) was used by dance photographer Gordon Anthony and subsequently Francis Bacon. Hoppé also made portraits of the street types of London: he photographed English cleaners, maids, and street vendors both in his studio and on the street. He continued this practice of capturing ordinary working men and women throughout his career as he traveled throughout the world.

By 1919, Hoppé had begun to travel the world in search of new subjects and landscapes. His journeys brought him to Africa, Germany, Poland, Romania, Czechoslovakia, the United States, Cuba, Jamaica and the West Indies, Australia, New Zealand, Japan, Indonesia, Singapore, Malaya, India and Ceylon. The resulting photographs were published in a number of books.