Hans Bellmer (13 March 1902 – 24 February 1975) was a German artist, best known for the life-sized pubescent female dolls he produced in the mid-1930s. Historians of art and photography also consider him a Surrealist photographer.

Bellmer was born in the city of Kattowitz, then part of the German Empire (now Katowice, Poland). Up until 1926, he worked as a draftsman for his own advertising company. 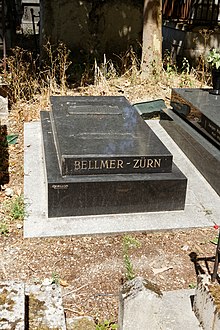 Bellmer is most famous for the creation of a series of dolls as well as photographs of them. He was influenced in his choice of art form in part by reading the published letters of Oskar Kokoschka (Der Fetisch, 1925). Bellmer's doll project is also said to have been catalysed by a series of events in his personal life. Hans Bellmer takes credit for provoking a physical crisis in his father and brings his own artistic creativity into association with childhood insubordination and resentment toward a severe and humorless paternal authority. Perhaps this is one reason for the nearly universal, unquestioning acceptance in the literature of Bellmer's promotion of his art as a struggle against his father, the police, and ultimately, fascism and the state. Events of his personal life also including meeting a beautiful teenage cousin in 1932 (and perhaps other unattainable beauties), attending a performance of Jacques Offenbach's Tales of Hoffmann (in which a man falls tragically in love with an automaton), and receiving a box of his old toys.[1] After these events, he began to actually construct his first dolls. In his works, Bellmer explicitly sexualized the doll as a young girl. The dolls incorporated the principle of "ball joint", which was inspired by a pair of sixteenth-century articulated wooden dolls in the Kaiser Friedrich Museum[2] Jonathan Hirschfeld has claimed (without further argumentation) that Bellmer initiated his doll project to oppose the fascism of the Nazi Party by declaring that he would make no work that would support the new German state. Represented by mutated forms and unconventional poses, his dolls (according to this view) were directed specifically at the cult of the perfect body then prominent in Germany.[3] 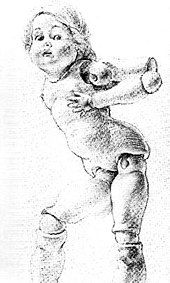 Sketch for the Die Puppe series, 1932

He visited Paris in 1935 and made contacts there, such as Paul Éluard, but returned to Berlin because his wife Margarete was dying of tuberculosis.[4]

Bellmer produced the first doll in Berlin in 1933. Long since lost, the assemblage can nevertheless be correctly described thanks to approximately two dozen photographs Bellmer took at the time of its construction. Standing about fifty-six inches tall, the doll consisted of a modeled torso made of flax fiber, glue, and plaster; a mask-like head of the same material with glass eyes and a long, unkempt wig; and a pair of legs made from broomsticks or dowel rods. One of these legs terminated in a wooden, club-like foot; the other was encased in a more naturalistic plaster shell, jointed at the knee and ankle. As the project progressed, Bellmer made a second set of hollow plaster legs, with wooden ball joints for the doll's hips and knees. There were no arms to the first sculpture, but Bellmer did fashion or find a single wooden hand, which appears among the assortment of doll parts the artist documented in an untitled photograph of 1934, as well as in several photographs of later work.

Bellmer's 1934 anonymous book, The Doll (Die Puppe), produced and published privately in Germany, contains 10 black-and-white photographs of Bellmer's first doll arranged in a series of "tableaux vivants" (living pictures). The book was not credited to him, as he worked in isolation, and his photographs remained almost unknown in Germany. Yet Bellmer's work was eventually declared "degenerate" by the Nazi Party, and he was forced to flee Germany to France in 1938, where Bellmer's work was welcomed by the Surrealists around André Breton.[5]

He aided the French Resistance during the war by making fake passports.[6] He was imprisoned in the Camp des Milles prison at Aix-en-Provence, a brickworks camp for German nationals, from September 1939 until the end of the Phoney War in May 1940.[7]

After the war, Bellmer lived the rest of his life in Paris.[6] Bellmer gave up doll-making and spent the following decades creating erotic drawings, etchings, sexually explicit photographs, paintings, and prints of pubescent girls. In 1954, he met Unica Zürn, who became his companion until her suicide in 1970.[8] He continued working into the 1960s. Of his own work, Bellmer said, "What is at stake here is a totally new unity of form, meaning and feeling: language-images that cannot simply be thought up or written up … They constitute new, multifaceted objects, resembling polyplanes made of mirrors … As if the illogical was relaxation, as if laughter was permitted while thinking, as if error was a way and chance, a proof of eternity.”[9]

Bellmer died 24 February 1975 of bladder cancer.[10] He was buried beside Zürn at Père Lachaise Cemetery with a tomb marked "Bellmer – Zürn".[10]

The 2003 film Love Object contains clear references to Bellmer's work, including the protagonist's obsessive relationship with a sex doll and the use of Bellmer's name as a leading character, Lisa Bellmer.

A creature from the 2001 video game Silent Hill 2 named Mannequin bears a strong resemblance to Bellmer's dolls. However, Masahiro Ito, the monster designer of the game, commented on this saying that they had no influence on his design of the Mannequin; instead his inspiration came from traditional Japanese folklore.[13][non-primary source needed]