Sir Cecil Walter Hardy Beaton, CBE Kt (14 January 1904 – 18 January 1980) was a British fashion, portrait and war photographer, diarist, painter, and interior designer, as well as an Oscar–winning stage and costume designer for films and the theatre.

Beaton was born on 14 January 1904 in Hampstead, north London, the son of Ernest Walter Hardy Beaton (1867–1936), a prosperous timber merchant, and his wife, Esther "Etty" Sisson (1872–1962). His grandfather, Walter Hardy Beaton (1841–1904), had founded the family business of "Beaton Brothers Timber Merchants and Agents", and his father followed into the business. Ernest Beaton was an amateur actor and met his wife, Cecil's mother Esther ("Etty"), when playing the lead in a play. She was the daughter of a Cumbrian blacksmith named Joseph Sisson and had come to London to visit her married sister.[2]

A 1932 Standard Rolleiflex, a type of camera used by Beaton

Cecil Beaton was educated at Heath Mount School (where he was bullied by Evelyn Waugh) and St Cyprian's School, Eastbourne, where his artistic talent was quickly recognised. Both Cyril Connolly and Henry Longhurst report in their autobiographies being overwhelmed by the beauty of Beaton's singing at the St Cyprian's school concerts.[3][4]

When Beaton was growing up his nanny had a Kodak 3A Camera, a popular model which was renowned for being an ideal piece of equipment to learn on. Beaton's nanny began teaching him the basics of photography and developing film. He would often get his sisters and mother to sit for him. When he was sufficiently proficient, he would send the photos off to London society magazines, often writing under a pen name and "recommending" the work of Beaton.[5]

Beaton attended Harrow School, and then, despite having little or no interest in academia, moved on to St John's College, Cambridge, and studied history, art and architecture. Beaton continued his photography, and through his university contacts managed to get a portrait depicting the Duchess of Malfi published in Vogue. It was actually George "Dadie" Rylands – "a slightly out-of-focus snapshot of him as Webster's Duchess of Malfi standing in the sub-aqueous light outside the men's lavatory of the ADC Theatre at Cambridge."[6] Beaton left Cambridge without a degree in 1925.

Believing that he would meet with greater success on the other side of the Atlantic, he left for New York and slowly built up a reputation there. By the time he left, he had "a contract with Condé Nast Publications to take photographs exclusively for them for several thousand pounds a year for several years to come."[8]

From 1930 to 1945, Beaton leased Ashcombe House in Wiltshire, where he entertained many notable figures.

In 1947, he bought Reddish House, set in 2.5 acres of gardens, approximately 5 miles (8.0 km) to the east in Broad Chalke. Here he transformed the interior, adding rooms on the eastern side, extending the parlour southwards, and introducing many new fittings. Greta Garbo was a visitor.[9] He remained at the house until his death in 1980 and is buried in the churchyard.[10][11][12] 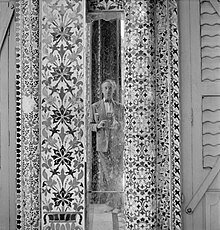 Cecil Beaton self portraits: Cecil Beaton (in civilian suit) and his Rolleiflex reflected in a mirror of the Jain temple, Calcutta, India.

Beaton designed book jackets (see Catherine Ives), and costumes for charity matinees, learning the craft of photography at the studio of Paul Tanqueray, until Vogue took him on regularly in 1927.[13] He set up his own studio, and one of his earliest clients and, later, best friends was Stephen Tennant. Beaton's photographs of Tennant and his circle are considered some of the best representations of the Bright Young People of the twenties and thirties. 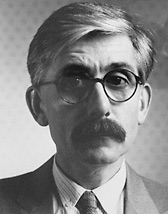 Portrait of Sir Roy Strong, Director and Secretary of the Victoria and Albert Museum

Beaton's first camera was a Kodak 3A folding camera. Over the course of his career, he employed both large format cameras, and smaller Rolleiflex cameras. Beaton was never known as a highly skilled technical photographer, and instead focused on staging a compelling model or scene and looking for the perfect shutter-release moment.

He was a photographer for the British edition of Vogue in 1931 when George Hoyningen-Huene, photographer for the French Vogue travelled to England with his new friend Horst. Horst himself would begin to work for French Vogue in November of that year. The exchange and cross pollination of ideas between this collegial circle of artists across the Channel and the Atlantic gave rise to the look of style and sophistication for which the 1930s are known.[14]

Beaton is known for his fashion photographs and society portraits. He worked as a staff photographer for Vanity Fair and Vogue in addition to photographing celebrities in Hollywood. In 1938, he inserted some tiny-but-still-legible anti-Semitic phrases (including the word "kike") into American Vogue at the side of an illustration about New York society. The issue was recalled and reprinted, and Beaton was fired.[15]

Beaton returned to England, where the Queen recommended him to the Ministry of Information (MoI). He became a leading war photographer, best known for his images of the damage done by the German Blitz. His style sharpened and his range broadened, Beaton's career was restored by the war.[16]

Beaton often photographed the Royal Family for official publication.[17] Queen Elizabeth The Queen Mother was his favourite royal sitter, and he once pocketed her scented hankie as a keepsake from a highly successful shoot. Beaton took the famous wedding pictures of the Duke and Duchess of Windsor (wearing an haute couture ensemble by the noted American fashion designer Mainbocher). He photographed Princess Margaret in a cream Dior dress for her 21st birthday in 1951, which became one of the most iconic royal portraits of the 20th century.[18][19][20][21] 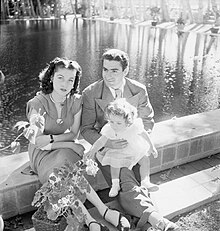 During the Second World War, Beaton was first posted to the Ministry of Information and given the task of recording images from the home front. During this assignment he captured one of the most enduring images of British suffering during the war, that of 3-year-old Blitz victim Eileen Dunne recovering in hospital, clutching her beloved teddy bear. When the image was published, America had not yet officially joined the war, but images such as Beaton's helped push the Americans to put pressure on their government to help Britain in its hour of need.[5]

Beaton had a major influence on and relationship with Angus McBean and David Bailey. McBean was a well-known portrait photographer of his era. Later in his career, his work is influenced by Beaton. Bailey was influenced by Beaton when they met while working for British Vogue in the early 1960s. Bailey's use of square format (6x6) images is similar to Beaton's own working patterns.[citation needed]

A Cecil Beaton design for Audrey Hepburn in the film My Fair Lady (1964), for which he won an Academy Award.

After the war, Beaton tackled the Broadway stage, designing sets, costumes, and lighting for a 1946 revival of Lady Windermere's Fan, in which he also acted.[citation needed]

He designed the sets and costumes for a production of Puccini's last opera Turandot, first used at the Metropolitan Opera in New York and then at Covent Garden.[citation needed]

Beaton designed the academic dress of the University of East Anglia.[22]

Cecil Beaton was a published and well-known diarist. In his lifetime, six volumes of diaries were published, spanning the years 1922–1974. Recently some unexpurgated material has been published. "In the published diaries, opinions are softened, celebrated figures are hailed as wonders and triumphs, whereas in the originals, Cecil can be as venomous as anyone I have ever read or heard in the most shocking of conversation" wrote their editor, Hugo Vickers.[23]

The last public interview given by Sir Cecil Beaton was in January 1980 for an edition of the BBC's radio programme Desert Island Discs. The interviewer was Roy Plomley. The recording was broadcast on Friday 1 February 1980 following the Beaton family's permission. Owing to Beaton's frailty, the interview was recorded at Beaton's 17th-century home of Reddish House in Broad Chalke in Wiltshire (near Salisbury).[citation needed]

Beaton, though frail, recalled events in his life, particularly from the 1930s and 1940s (the Blitz). Among the recollections were his associations with stars of Hollywood and British Royalty notably The Duke and Duchess of Windsor (whose official wedding photographs Beaton took on 3 June 1937 at relatively short notice); and official portraits of Queen Elizabeth (later Queen Elizabeth The Queen Mother) and Her Majesty The Queen on her Coronation day on 2 June 1953. The interview also alluded to a lifelong passion for performing arts and in particular ballet and operetta.[citation needed]

The Beaton programme is considered to be almost the final words on an era of "Bright Young Things" whose sunset had taken place by the time of the abdication of Edward VIII. Beaton commented specifically on Wallis Simpson (later titled The Duchess of Windsor after her marriage to the former King Edward VIII). The Duchess of Windsor was still alive at the time of the original Beaton interview and broadcast.[citation needed]

Beaton said that the one record that he would retain on the desert island should the others get washed away would be Beethoven's Symphony No 1, and his chosen book was a compendium of photographs he had taken down the years of "...people known and unknown; people known but now forgotten".[citation needed]

Two years later, he suffered a stroke that left him permanently paralysed on the right side of his body. Although he learnt to write and draw with his left hand, and had cameras adapted, Beaton became frustrated by the limitations the stroke had put upon his work. As a result of his stroke, Beaton became anxious about financial security for his old age and, in 1976, entered into negotiations with Philippe Garner, expert-in-charge of photographs at Sotheby's.

On behalf of the auction house, Garner acquired Beaton's archive – excluding all portraits of the Royal Family, and the five decades of prints held by Vogue in London, Paris and New York. Garner, who had almost single-handedly invented the photographic auction, oversaw the archive's preservation and partial dispersal, so that Beaton's only tangible assets, and what he considered his life's work, would ensure him an annual income. The first of five auctions was held in 1977, the last in 1980.[citation needed] 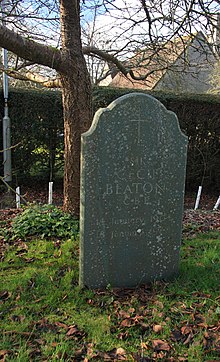 Major exhibitions have been held at the National Portrait Gallery in London in 1968 and in 2004.[citation needed]

The first international exhibition in thirty years, and first exhibition of his works to be held in Australia was held in Bendigo, Victoria from 10 December 2005 to 26 March 2006.[citation needed]

In October 2011, the BBC's Antiques Roadshow featured an oil portrait by Beaton of rock star Mick Jagger, whom Beaton met in the 1960s. The painting, originally sold at the Le Fevre Gallery in 1966, was valued for insurance purposes at £30,000.[28]

The Museum of the City of New York dedicated an exhibition to Cecil Beaton from October 2011 to April 2012.[29]

An exhibition celebrating The Queen's Diamond Jubilee and showing portraits of Her Majesty by Cecil Beaton, opened in October 2011 at the Laing Art Gallery, Newcastle-upon-Tyne.[citation needed]

Cecil Beaton at Home: Ashcombe & Reddish at The Salisbury Museum, Wiltshire, from 23 May- 19 September 2014, a biographical retrospective focussing on Beaton's two Wiltshire houses, brought together for the first time many art works and possessions from both eras of Beaton's life. The exhibition included a full-size reproduction of the murals and four-poster bed from the Circus Bedroom at Ashcombe, as well as a section of the drawing room at Reddish House.[citation needed]

In film and television