American photographer
Not to be confused with Jerry Yulsman.

As an emerging artist in the 1960s, Jerry Uelsmann received international recognition for surreal, enigmatic photographs (photomontages) using his unique method of composite printing and his dedication to revealing the deepest emotions of the human condition.[1][2] Over the next seven decades, his artwork and reputation were documented in numerous publications and interviews with the last one being done by Russell Brown via Zoom in July 2020.[3][4] Uelsmann described his creative process as a journey of discovery in the darkroom (visual research laboratory).[5][6] Going against established practices, he used multiple enlargers, multiple negatives, and post-visualization.[6][3] Trial and error were essential steps.[1][3] He produced well-crafted photographs without specific narratives but with open-endedness and amazement.[7][2] Uelsmann’s work influenced generations of both analog and digital photographers.[8][4] Although he admired digital photography, he remained completely dedicated to the alchemy of film photography in the black and white darkroom.[3]) He received a Guggenheim Fellowship in 1967, a National Endowment for the Arts Fellowship in 1972, and the Lucie Award in Fine Art in 2015. He was a Fellow of the Royal Photographic Society of Great Britain, a founding member of The Society of Photographic Education. 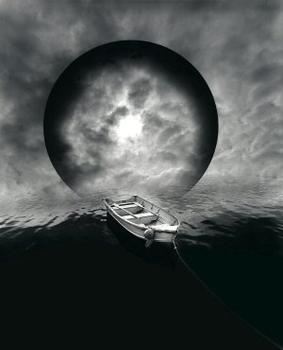 Uelsmann was born in Detroit, Michigan, in 1934. While attending public schools, at the age of fourteen he became interested in photography. He believed that through photography he could exist outside of himself, to live in a world captured through the lens. Despite poor grades, he managed to land a few jobs, primarily photographs of models. Eventually, Uelsmann went on to earn a BFA in 1957 from the Rochester Institute of Technology and M.S. and M.F.A. degrees from Indiana University; he was inspired and influenced by teachers Minor White, Ralph Hattersley, and Henry Holmes Smith. Invited by Van Deren Coke, he taught photography at the University of Florida from 1960. He was a founding member of and elected to Board of Directors of, the National Society for Photographic Education. In 1967, Uelsmann had his first solo exhibit at The Museum of Modern Art which opened doors for his photography career.[9]

Uelsmann produced composite photographs with multiple negatives and extensive darkroom work. He used up to a dozen enlargers at a time to produce his final images and had a large archive of negatives that he shot over the years. Uelsmann did not carry multiple attachments, but only one camera, "Most photographers carry many cameras with multiple attachments. Most photographers have one enlarger. I have half a dozen." When beginning to create one of his photomontages, he had a strong intuitive sense of what he was looking for, some strategy for how to find it, and an understanding that mistakes are inevitable and are part of the creative process. His process began after a day of shooting. He then returned to his workstation in his home and covered a large drafting table with hundreds of proof sheets. He folded and overlapped various contact prints, explored the visual possibilities, then brought the options into his darkroom. He then set his selected pieces into the large number of enlargers that he owned in his darkroom, and moved the photo paper progressively down the line, building up an image.[10] The negatives that Uelsmann used reappeared within his work, acting as a focal point in one work, and background in another. Similar in technique to Rejlander, Uelsmann was a champion of the idea that the final image need not be tied to a single negative, and may be composed of many. During the mid-twentieth century, when photography was still being defined, Uelsmann did not care about the boundaries given by the Photo Secessionists or other realists at the time, he simply wished to share with the viewer the images from his imagination and saw photomontage as the means by which to do so. Unlike Rejlander, though, he did not seek to create narratives, but rather "allegorical surrealist imagery of the unfathomable". Uelsmann subsisted on grants and his teaching salary, rather than commercial work.

Uelsmann's interpretations of landscape elements, reworked, tweaked, and recontextualized, force the viewer to actively interact with his subjects.[11] Continually in his photographs the viewer is confronted with entrances, whether they be gates, windows, trapdoors or ordinary doors. Usually, the entrances are shut, but even when they are not, the viewer must imagine what is inside. This is an example of the viewer having to actively interact with the photo they are forced to think more deeply and critically about their own interpretation. In Uelsmann's art there are many right answers - and discovering them is a process that involves both the artist and the viewer. Untitled (Boat and Moon) demonstrates his ability to seamlessly blend multiple photographs into one image that appears to reinvent reality.[12]

Despite his works' affinity with digital techniques, Uelsmann continued to use traditional equipment. "I am sympathetic to the current digital revolution and excited by the visual options created by the computer. However, I feel my creative process remains intrinsically linked to the alchemy of the darkroom."[13] Uelsmann was retired from teaching and lived in Gainesville, Florida. In 2016, he divorced his third wife, Maggie Taylor.[14] He had one son, Andrew. Uelsmann still produced photos, sometimes creating more than a hundred in a single year. Out of these images, he liked to select the ten he liked the most, which is not an easy process.[13]

His photographs can be seen in the opening credits of the television series The Outer Limits (1995), and the illustrated edition of Stephen King's 'Salem's Lot. In addition, his artwork appears on the cover of Dream Theater's 2003 album Train of Thought, and Bon Jovi's 2016 album This House Is Not for Sale. Uelsmann died on April 4, 2022, at the age of 87 in Gainesville, Florida.[15]

Uelsmann's work has been exhibited in over 100 individual shows across the United States and abroad over the past forty years. It is included in the permanent collections of, among others:[16][17]