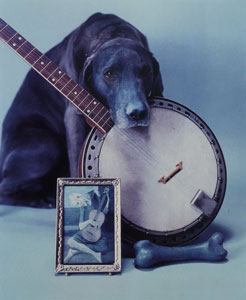 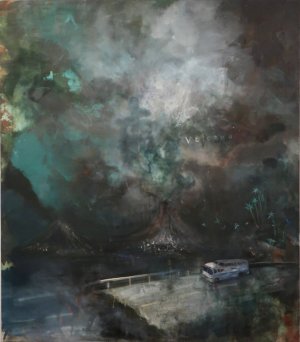 Volcano by William Wegman, 1988, acrylic and oil on canvas, Honolulu Museum of Art

William Wegman (born December 2, 1943) is an American artist best known for creating series of compositions involving dogs, primarily his own Weimaraners in various costumes and poses.[1]

By the early 70s, Wegman's work was being exhibited in museums and galleries internationally. In addition to solo shows with Sonnabend Gallery in Paris and New York, Situation Gallery in London and Konrad Fisher Gallery in Düsseldorf, his work was included in such seminal exhibitions as "When Attitudes Become Form," and "Documenta 5" and regularly featured in Interfunktionen, Artforum and Avalanche.

While he was in Long Beach, Wegman got his dog, Man Ray, with whom he began a long and fruitful collaboration. Man Ray, known in the art world and beyond for his endearing deadpan presence, became a central figure in Wegman's photographs and videotapes. In 1982, Man Ray died, and was named "Man of the Year" by the Village Voice. It was not until 1986 that Wegman got a new dog, Fay Ray, and another collaboration began marked by Wegman's extensive use of the Polaroid 20 x 24 camera. With the birth of Fay's litter in 1989, Wegman's cast of characters grew to include Fay's offspring — Battina, Crooky and Chundo — and later, their offspring: Battina's son Chip in 1995, Chip's son Bobbin in 1999 and Candy and Bobbin's daughter Penny in 2004.

Although primarily known as a photographer, Wegman returned to painting in the mid 1980s[2] Among his oeuvre of paintings are a number of canvases filled with smoke and fire that depict natural and manmade disasters.[3] Volcano, in the collection of the Honolulu Museum of Art demonstrates this aspect of the artist's work.

He appeared on The Colbert Report in 2010. Wegman is the author of numerous books for children, including the New York Times bestseller Puppies. His latest children's book, Flo & Wendell, is published with Dial Books for Young Readers.

His work, which includes photography, video, painting and drawing, is held in permanent collections of the Museum of Modern Art, the Whitney Museum of American Art, the Hammer Museum, the Los Angeles County Museum of Art, the Centre Pompidou and the Smithsonian American Art Museum.

His work has also been a popular success, and have appeared in books, advertisements, films, as well as on television programs like Sesame Street and Saturday Night Live. In 2006, Wegman's work was featured in a retrospective at the Brooklyn Museum, the Smithsonian American Art Museum, the Norton Museum of Art, Wexner Center for the Arts and the Addison Gallery of American Art. The show, entitled William Wegman: Funney/Strange, explored 40 years of his work in all mediums.[4]

Wegman's dogs first appeared on Sesame Street in 1988. Fay Ray starred in segments like "Old McFay Counts to 40". In February 1996, descendants Battina (aka Batty), Crooky, Chundo, and Chip starred in new segments based on nursery rhymes. Wegman told Entertainment Weekly, "They are only [being shot] maybe 30 seconds at a time. The rest of the time they're sitting around, rather blasé about life."[5]

Who Are The People In Your Neighborhood? - Based on the classic Sesame Street song, the dogs act out real life jobs. Some of these occupations included: Waiter, Painter, Sales Person, Truck Driver, Fisherman, Auto Mechanic, Hairdresser and Conductor.

Wegman is married to wife Christine Burgin, who is also his manager. He has two children. Wegman splits his time between New York City and his house on Rangeley Lake, Maine.[6][7]