Jan Saudek's art work represents a unique technique combining photography and painting. In his country of origin, Czechoslovakia, Jan was considered a disturbed artist and oppressed by authorities. His art gained more prominence during the 1990s, thanks to his collaboration with the publisher Taschen.

During the 2000s, Saudek lost all his photo negatives in matrimonial dispute and his pictures are now displayed on internet for free. Jan claims they were stolen from him.

Jan is the author of many “mise en scene” that were re-taken and copied by other artists. The cliché of a naked man holding a naked new born baby with tenderness became a picture that was reproduced so many times that the composition became as commonplace as posing for a graduation picture.

During his life in communist Czechoslovakia, Jan was labeled by the totalitarian regime as a pornographer.

He lived in poverty using the only room in his basement as his studio. A disintegrating wall and a window giving a glimpse into the backyard became the witnesses of his fantasies and collaborations with models of all different sizes and origins.

Jan Saudek and his twin brother Karel (also known as Kája) were born to a Slavic (Czech) mother and Jewish father in Prague in 1935.[1] Their mother's family came to Prague from Bohemia, and their father from the city of Děčín in the northwest part of that area. During World War II and after the invasion of the German Nazis, both sides of his family were racially persecuted by the invaders. Many of his Jewish relatives died in Theresienstadt concentration camp during the war. Their father Gustav was deported to Theresienstadt concentration camp in February 1945. Although their mother and many other relatives died, both sons and father survived the war. A Communist-dominated government gained power after the war to rule the country, enforced by the Soviet Union and considered to be behind the Iron Curtain.

According to Saudek's biography, he acquired his first camera, a Kodak Baby Brownie, in 1950. He apprenticed to a photographer, and in 1952 started working in a print shop; he was restricted to this work by the Communist government until 1983. In 1959, he started using the more advanced Flexaret 6x6 camera, and also engaged in painting and drawing. After completing his military service, he was inspired in 1963 by the catalogue for American photographer Edward Steichen's The Family of Man exhibition, and began to work to become a serious art photographer. In 1969, Saudek traveled to the United States, where he was encouraged in his work by curator Hugh Edwards of the Art Institute of Chicago.

Returning to Prague, Saudek had to work at his photography clandestinely in a cellar, to avoid the attentions of the secret police. With his work turning to themes of personal erotic freedom, he used implicitly political symbols of corruption and innocence. From the late 1970s, he became recognized in the West as the leading Czech photographer, and also developed a following among photographers in his own country.[2] In 1983, the first book of Saudek's work was published in the English-speaking world. The same year, he became a freelance photographer; the Czech Communist authorities allowed him to stop working in the print shop, and gave him permission to apply for a permit to work as an artist. In 1987, the archives of his negatives were seized by the police, but later returned.

Saudek lives and works in Prague. His brother Kája Saudek was also an artist, the best-known Czech graphic novelist.[1][citation needed][3] 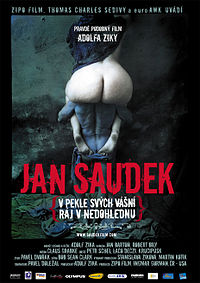 Saudek's early art photography is noted[by whom?] for its evocation of childhood. His later works often portrayed the evolution from child to adult (re-photographing the same composition/pose, and with the same subjects, over many years). Religious motifs and the ambiguity between man and woman have also been some of Saudek's recurring themes. During the 1990s, his work at times generated censorship attempts in the West because of its provocative sexual content.

Saudek's imagery has sometimes had a mixed reception internationally. He gained early shows in 1969 and 1970 in the United States and in Australia. In 1970 his work was shown at the Australian Centre for Photography and was welcomed by curator Jennie Boddington at the National Gallery of Victoria. Decades later, by contrast, his photograph Black Sheep & White Crow, which features a semi-naked pre-pubescent girl, was removed from the Ballarat International Foto Biennale in Victoria, Australia just before the opening on 21 August 2011; objections had been made related to allegations of child prostitution for his subject.[4]

Saudek's photographs have been featured as covers for the albums of Anorexia Nervosa (New Obscurantis Order), Soul Asylum (Grave Dancers Union), Daniel Lanois (For the Beauty of Wynona), Rorschach (Remain Sedate), and Beautiful South (Welcome to the Beautiful South).

Saudek's work is held in the following permanent collections: