Larry Fink (born March 11, 1941) is an American photographer best known for his black-and-white images of people at parties and in other social situations.

Fink was born in 1941 in Brooklyn, New York. His father, Bernard Fink, was a lawyer, and mother, Sylvia Caplan Fink, was an anti-nuclear weapon activist and an elder rights activist for the Gray Panthers. His younger sister was noted lawyer Elizabeth Fink (1945–2015).[1] He grew up in a politically conscious household and has described himself as "a Marxist from Long Island."[2][3] He studied at the New School for Social Research in New York City, where photographer Lisette Model was one of his teachers and encouraged his work.[2][4]

He has been on the faculty of Bard College since 1986. Earlier he taught at other institutions including the Yale University School of Art (1977–1978), Cooper Union School of Art and Architecture (1978–1983), Parsons School of Design, and New York University.[2][4][5]

Fink's best-known work is Social Graces, a series of photographs he produced in the 1970s that depicted and contrasted wealthy Manhattanites at fashionable clubs and social events alongside working-class people from rural Pennsylvania participating in events such as high school graduations. Social Graces was the subject of a solo exhibition at the Museum of Modern Art in 1979 and was published in book form in 1984.[2][6] A New York Times reviewer described the series as exploring social class by comparing "two radically divergent worlds", while accomplishing "one of the things that straight photography does best: provid[ing] excruciatingly intimate glimpses of real people and their all-too-fallibly-human lives."[6]

In 2001, for an assignment from The New York Times Magazine, Fink created a series of satirical color images of President George W. Bush and his cabinet (portrayed by stand-ins) in scenes of decadent revelry modeled on paintings by Weimar-era painters Max Beckmann, Otto Dix and George Grosz. The planned publication of the series was canceled after the September 11 attacks, but was displayed in the summer of 2004 at the PowerHouse Gallery in New York, in a show titled "The Forbidden Pictures: A Political Tableau."[7]

Fink was the recipient of Guggenheim Fellowships in 1976[8] and 1979 and National Endowment for the Arts Individual Photography Fellowships in 1978 and 1986. In 2002 he received an honorary doctorate from the College for Creative Studies in Detroit.[5] 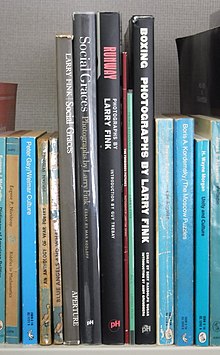