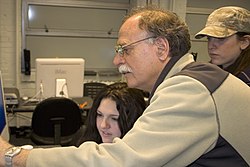 He was born as Antonio Mendoza in Havana and moved to Miami with his family in 1960. He graduated from Yale with a Bachelor of Engineering and Harvard with a Master of Architecture, before becoming a full-time photographic artist in 1973. Married to Maria del Carmen from Esperanza, Cuba, and they have two children Alex and Lydia.[citation needed]

Mendoza taught in the photography department at the Ohio State University in Columbus, Ohio from 1988 until his retirement in 2013.[1]

His most famous book, Ernie, is a photographic memoir centered on a cat he encountered when he moved into an apartment in New York City. Mendoza has received three National Endowment for the Arts Fellowships, a Guggenheim Photography Fellowship as well as two Creative Writing fellowships from the Ohio Arts Council.

His photographs have featured in many major museums.[which?]